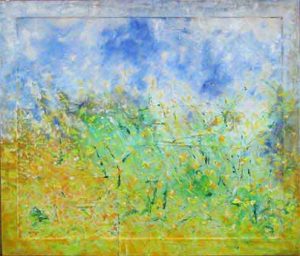 I have cultivated a passion for art since I was young; in the 70s I managed together with my dear friend “Saetta da San Gimgnano” or Gabriele Becucci also an art gallery in San Gimignano, which hosts famous authors such as Michele Cascella.
Since 2000 Buiani has the opportunity to entirely apply himself to painting.

Alberto Buiani was born in San Gimignano and the dream of this place remains in his artworks, he paints it not as it is in reality, but as he reminds it in the memories of youth.

His painting is material, rich of corporeal mixtures, which makes the picture alive, so that it’s made as a real decoration object. Moreover, everything is completed by a frame – not frame which is an integrant part of the work.
The themes are principally the places where the artist lives: S. Gimignano, Poggibonsi with the surrounding countryside, the Crete of Siena, Chianti shire, and then Woods… Flowers…

From April 2019 the Collection-Exhibition at the Radisson Blu Resort Hotel in Galzignano Terme is still in progress!